New Book Due out soon.

Some of my Christmas Angels.

Despite fractures in my hip, my husband and I made it away for fout days, me braced up, and dealing with the ongoing fatigue from ME/CFS. I plan to post on this blog a bit more often than I have in a while.

I rarely sign onto my blog now. The social networks are killing all but the most persistent bloggers and my energy remains limited by ME/CFS.. I still plan to visit from time to time but please look through past posts. A lot worth reading or viewing is on here.

Thanks!
Pris
Posted by Pris at 9:51 AM No comments: 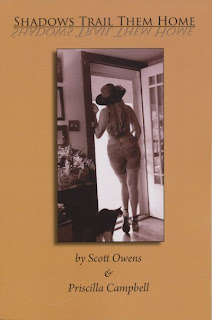 Shadows Trail Them Home has been released from Clemson University Press. December 2012. The price is 15 dolllars plus postage

Please contact me at campris (at)bellsouth(dot)com if you would like to order one from me and to arrange to send a check. Any copies from me will be signed only by me. I have only a limited numbe

Thanks to Shae Jasc Pense for both modeling for and photographing the cover photo.

You can also purchase from me by going to this paypal link. This price includes postage for the U.S. Contact me for postage amounts if you're in Canada or some other country.

My latest book is out.

. If you don't have paypal, please contact me at campris (at)bellsouth(dot)com to arrange to send a check. An copies from me will be signed only by me. I have only a limited number. When
that number is sold I'll remove the paypal link below. You can still order from
Scott Owens for his signature (contact me) or buy from Clemson University Press
by going HERE

Thanks to Shae Jasc Pense for both modeling for and photographing the cover photo.

Just out--the new Rusty Truck with three poems by yours truly. Click the following link to read them and please post a comment on the Truck if so moved.

Four Day Publishers Sale means you can buy Postcripts to the Dead for 25 percent off!

SALE. SALE. Hey, I just found out MagCloud.com is having a four day fourth year birthday sale and it's already on day two. Twenty-five percent off on all of their books/journals/chaps. Yes, you have to sign up at the site, but I did that when PoetsArtists and other of Didi  Menendez's journals started coming out from there and they've never spammed me, plus they do a GREAT job.

Bottom Line is if you haven't read my last chap by MiPoesias productions, Postscripts to the Dead, it's there for you at a low cost but hurry.

Postscripts to the Dead MagCloud link

Below is the opening poem in the chap. The book moves from poems about celebrities to friends to old loves and family.

Elvis wanders through Graceland,
wonders why the rooms are roped off,
why strange women in Elvis tees,
scarves over their curlers, walk
through his house weeping.

He wonders where Priscilla is,
why Lisa Marie looks right through him.
He doesn't get the supermarket jokes,
the bobbing Elvis dolls or why busloads
of strangers light candles outside every day.
He hears rumors he's dead but figures
the Colonel hid him, cooked that up for publicity.

Sometimes he takes a Caddy
out onto the Memphis streets,
shark fins cleaving a slipstream
gobbling the memories behind him.
He dreams of his sweet mama,
peanut butter and banana sandwiches,
quieter days in Tupelo.

Most of his sequins have fallen.
They leave a starry trail
to trace and retrace each night but
he trembles when a new one tumbles.
If they're gone before the Colonel returns,
how will he find his way?
Posted by Pris at 12:00 PM 4 comments:

My husband drove me and my friend who now lives three hours north of me for our annual three day weekend in Daytona. We've had to cancel in the past so I'm glad we both could make it. I again had no voice, an ongoing problem with me, and was weak, but with the help of my pushchair (husband pushing me in and out of the condo and the one place we went each day) and by writing notes so I could 'talk' to Margie, we made the trip a good one. I'm so thankful my husband will take us each year. My friend has severe neuropathy so can no longer drive to come down and see me so this is our once a year get together. We've been friends since 1980.

Being near the ocean is always wonderful and after breathing the salt air 24/7 by the second day I was able to talk in a very soft voice off and on the next day.

Below are some photos from the trip.

Margie on our condo patio enjoying our arrival: 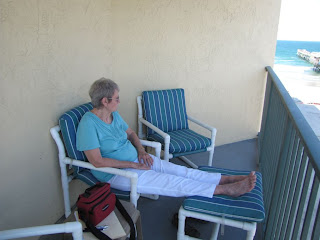 Margie and me posing by the ocean on a chilly first day. The beach was almost empty and the waves high. I thought it was beautiful. 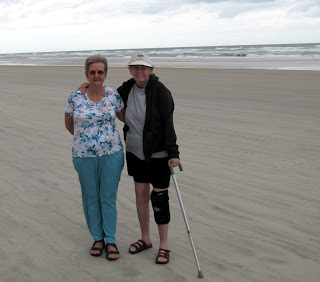 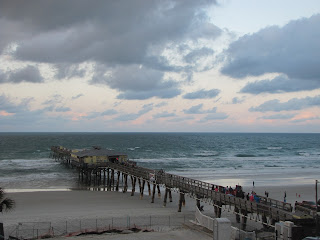 Margie and my husband Steve just up the second day 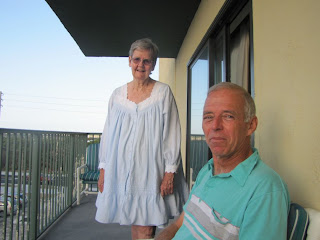 Me acting the goofus our first night there. It was a bit chilly so I dressed for the occasion:-) 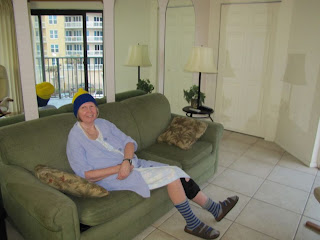 On the second full day we drove 20 minutes to New Smyrna Beach. In contrast to the day before it was bumper to bumper traffic crossing the causeway to the beach and not an empty space to park on the right side all the way down to the south causeway crossing back over. Interesting, but I prefer the quieter beach. 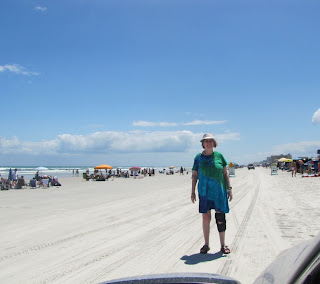 And one more sunrise before leaving... 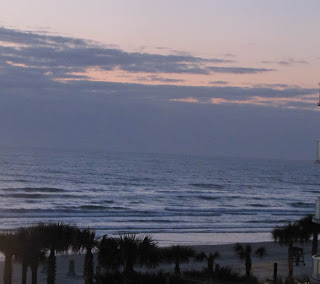 The interview issue of PoetsArtists, a MiPOEsias production is just out. You'll find my interview (along with my secrets) along with a poem in this issue. Many good poets and artists here. I hope you take time to read it. Thanks! Pris
Posted by Pris at 1:00 PM 2 comments:

Yes, you can die from ME.CFS 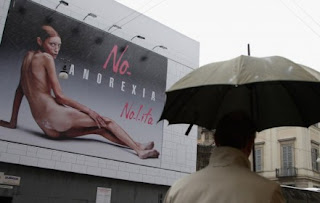 Another day, another dainty dead girl. The premature passing of the French model Isabelle Caro from complications due to anorexia nervosa is as tragic as it is unsurprising. Caro, 28, was the face of the world-famous Nolita campaign, a poster project designed to show dieting teenagers the horrific effects of anorexia on the body.......Continue the article here 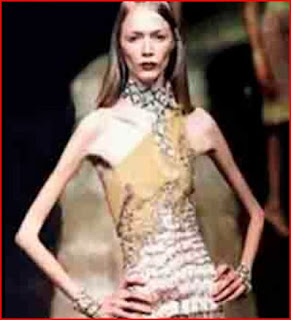 Another photo of Isabel Caro.
Posted by Pris at 11:33 AM 2 comments:

Pris
South Florida, United States
I didn't start out as a poet. I wanted to be a novelist. I also wanted to sail the Intracoastal Waterway through the Chesapeake Bay to the Vineyard one more time. On September 23, 1990, I woke up with a severe case of what was later to be diagnosed as ME/CFS (known by the demeaning name of Chronic Fatigue Syndrome).Finally, this year, 2011, the name was officially changed to ME/CFS. Hooray! As a former Clinical Psychologist, losing my old life was no fun! See the About Me page on my website to learn more about life before.
You'll find my poems in Chiron Review, The Dead Mule, Main Street Rag, PoetsArtist, Nixes Mate, Outlaw Poetry, Red Fez, , Wild Goose Review, In The Fray, Empowerment4Women, haigaonline, frogpond, cattails, archives of Simply Haiku, to name a few. The small press has published eight collections of my poetry.